Oh yeah here they are a few screen shots mainly in the order of process to having an account minus the actual sign-up form (couldn't fit in a screen shot). Also you might be wondering just why don't you do some HTML code dumps into pages so we can check it out for real? Well Google did something very clever by dynamically creating the pages on the fly using java and random hashes that make it nearly impossible to copy their web pages' source code. With some smarts and clever hacks of my own I could maybe pull it off, but I don't feel like trying since I've got other things I need to be doing hence the reason why I didn't get the screen shots posted right away along with my last blog posting. 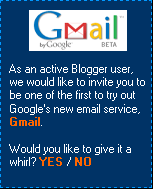 This is what I saw when I logged into my blogger account and of course hit 'YES' to apply for the beta program. These images here and here show off the two pages I had to go through in order to get to the sign-up page. Finally here is what it looks like. And yes that storage isn't exactly a gig as you would think since an exact gig is 1024MBytes. I believe this was done on purpose.

I hope you like the few screen shots I've done. I'll plan on doing some more before the weekend and I've also saved a text file of the User Agreement that gmail users have to agree to.

GMail offered and I said Yes!

Today around 1:43PM (GMT -06:00) when I signed into blogger.com I was offered a chance to beta test the Google mail program and I was interested so I said Yes. I was told by a good friend of mine, Erik, that I should log into my blogger account and check out the new Gmail beta tester offer because it sounded pretty cool and he knew about it from the posting on Slashdot.

Everything is going to be OK! I finally made a blog posting...

Yeah as usual I don't make a blog posting in days or sometimes weeks then finally make one. Well what can I say I've just been doing the same routine such as going to school at ITT-Tech, doing the college homework, and work on side projects of mine whenever I can. I'm also currently trying to get a job so I can afford the pleasures of life like pay my DSL line and build a replacement server machine. :)

I'm right now still working on my VB6 programming class final project which is a BattleShip game that I'm doing. Here real soon I will post some screen shots of it even though there isn't much to look at really and I got the networking code about 20% complete. Yep I'm implementing somewhat multi-player support into it since I only want it to be a two player game and that's about it since I do not want to implement A.I. logic into the game because that would be too much work involved.

I plan on this weekend to continue finishing up the Go Project site so that'll be a lot more functional for those of you who actually use the thing. Well that's about it and I hope you had fun on April Fools day cause I know I didn't do anything special. ;)